My experience with orange wines has been quite limited in the few years. Frankly, I have only tried certain bottles from Friuli, the Rhone and southern France.

So when i came to know that one of my favorite wine importers was carrying the orange wine of Ambiz, I jumped right away and bought me a case!!. Ambiz is imported by Glou and you can get his wines by the case of 6 for a price of less than $30. 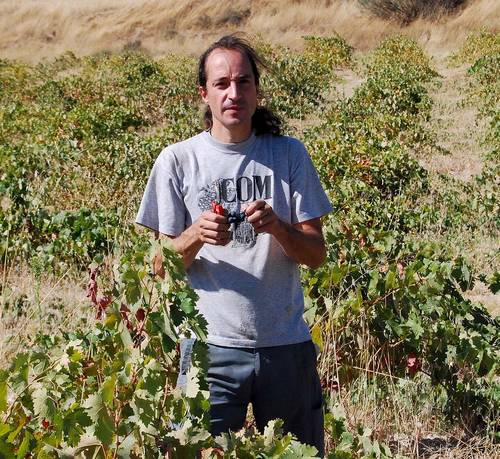 Fabio Bartolomei has been making wine since 2003 in the upcoming Sierra de Gredos in Spain. A passionate wine lover who discovered natural wines by accident, he makes barely 8000 liters from 3ha of vines. A true artisanal producer, whose wines are rapidly attaining cult status. He makes many micro-cuvées from his vineyard collection. Fabio can be described as natural wine producer: He grows organic grapes and uses little or no sulfites at all. He tends five vineyards that are located in villages close to Madrid and Sierra de Gredos. These are: Carabana, Villarejo, Chelva and Sotillo de la Adrada. To makes his wines, he rents a wine facility  in El Tiemplo who has a capacity of 1.5 million and was abandoned. He is giving it a very good use.

Fabio makes an amazing  orange wine from the indigenous Spanish grape Albillo Real.  According to Wine Grapes by Jancis Robinson, Albillo was mentioned as early as 1513 by the Spanish agronomist Gabriel Alonso de Herrera when he was describing the varieties of Castilla, Extremadura and Andalucia. Traditionally the variety has been used to make soft aromatic golden wines for current consumption. It was also been employed to add perfume to a blend. Albillo Real is grown in Madrid but also in Castilla-La Mancha, Extremadura, the Canary Islands and Galicia. The variety is not to be confused with Albillo Mayor or Albillo de Albacete which yields something totally different

Here is what Fabio has to say about Albillo Real from his website ( http://vinosambiz.blogspot.ca/2017/05/.)

Albillo real is used by quite a few local producers. After Garnacha, it is in fact the insignia grape variety of Sierra de Gredos. Even so it is quite difficult to get hold of. Firstly it is also used as a table grape as it’s sweet and aromatic and very nice to eat. It’s an early ripening variety (early to mid August) so there’s even more incentive to sell it for eating as opposed to selling it for winemaking). And it’s the preferred variety that  birds like to eat! All this adds up to it being an expensive grape.

But it’s worth the effort and expense.

The resulting wines are generally interesting, complex and delicious.

Not to be confused with Albillo Mayor, which is a completely different grape and not nearly so interesting or aromatic (apologies to any Albillo Mayor producers, mais c’est la vie!).

Alba 2016 has a tiny production of 2000 bottles and the wines is born from the soft slopes of the Sierra de Gredos. Fabio press lighty with a short maceration and aging in Amphora.

Delicious nose. Complex earthy nuances, lemon jelly with orange marmalade, white flowers and spices such as saffron and white pepper. Bright and very round ( A polished tannic sensation in the wine) with lots of confit citric fruit character such as grapefruit peel. Pleasant and very clean aftertaste, bringing to mind lime, chalk and Ricola candy. Definitely a buy by the case wine.

What to eat with Ambiz Alba Orange wine?

I really enjoyed the Ambiz Alba with some chicken empanadas Venezuelan style. For me, the Ambiz complemented rather than dominated the flavour of the Empanada. This can be described as a seasoned chicken with cumin and cilantro with the taste of fried corn dough. But definitely, it could pair well with other dishes of Venezuelan gastronomy such as Pabellon Criollo for instance.

Spanish orange wines are a still a mistery to me and hope to continue my learning experience with them. Do you have any favorite orange wine producers in Spain?. I am waiting for your reccomendations.